Nith.TV : A’ the Airts Summer School 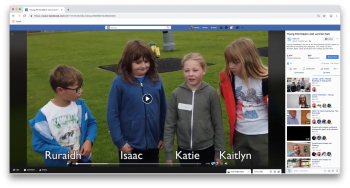 Jade Davidson and David Rushton have been working with 6-11 year olds making short films about changes they’d like to see in the town. The films on local playparks can be found on https://www.facebook.com/NITHTVforKIDS/. Over the coming nine months we plan to involve local youngsters from 6-14 in making films about what they’d like to see in Upper Nithsdale and to bring the filmmakers together with councillors, politicians and local policy makers via a Kids Council at which the films will help serve as research and consultation. Over the Summer the news-team has also filmed a profile of the world’s longest-running Post Office in Sanquhar (which is subject to sale and possible closure!), a promo for Mostly Ghostly’s Folklore Festival, an interview with carpet factory director Frank Williamson on expansion and jobs while covering the model boat making for an event on the local pond on the 10th August. It’s been a great project and a small part of A’ the Airts wonderful Kids Summer School. Thanks too to Holywood Trust for enabling us to to carry this forward and to involve more youngsters in having their say (and seeing it come about).